Illuminating the interior of your caravan with LED’s is a practical way to reduce your power consumption. When compared to an incandescent bulb, the LED uses only 22% of the energy, produces 95% luminaries and lasts more than 25 times longer. The LED is also smaller so placement on the interior of your caravan is easier and never get in the way of people moving around.

This post contains affiliate links. As an amazon associate I earn from qualifying purchase (at no extra cost to you).

12V LED Lights For Caravans and Motorhomes in 2021 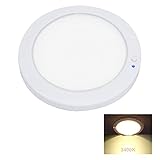 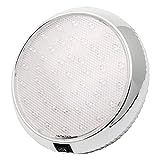 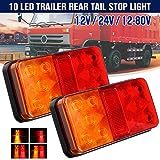 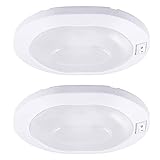 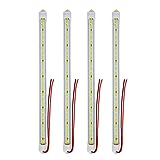 The following are 6 examples of what is available to help illuminate the interior of your caravan. 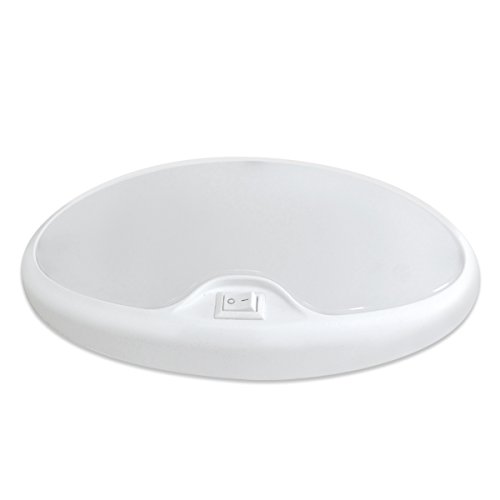 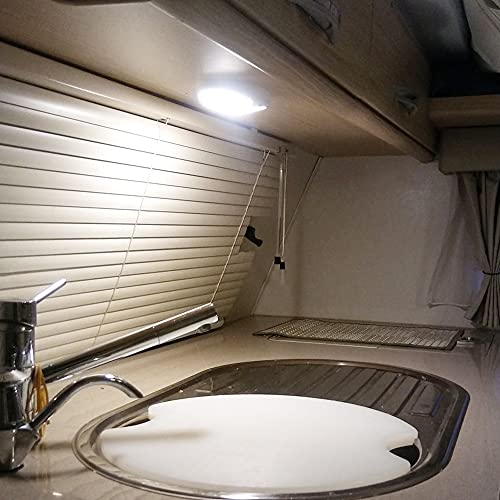 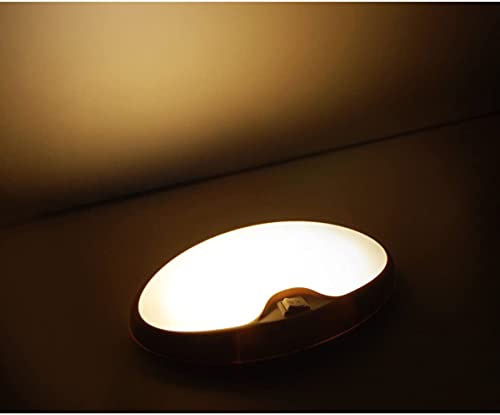 This 12v LED light source illuminates similar to a soft white incandescent bulb, but at a fraction of the energy, one uses. It creates 210 lumens while only taking 3 watts of power at 0.26 Amps. The shape is that of an oval with a translucent white dome that evenly distributes the light over the interior of your caravan. The unit is only 1” from the base to the edge of the dome. This light source is simple to install and only requires 2 anchor screws and is powered by the stock wires used with the factory dome light and has its own switch. Changing caravan lights to 12v LED lights with DREAM is an easy DIY job.

This is the 12v LED lights unit to use if you need to light the inside of your caravan with just one unit that has 10 separate modules set up in a series. Each module has 3 separate diodes with a 160 degree view. From the first module to the last is a space of 90”. They are mounted with double-sided tape, with the height of the light being 0.8” off the mounting surface. The unit is water resistant. Together the 30 LEDs use 15 watts of power for a total of 6000 Kelvins. The lumens and amps are not listed. An extra supply of 197” of wire is provided so that you can cut and splice to fit your needs. This unit does not come with an on-off switch. 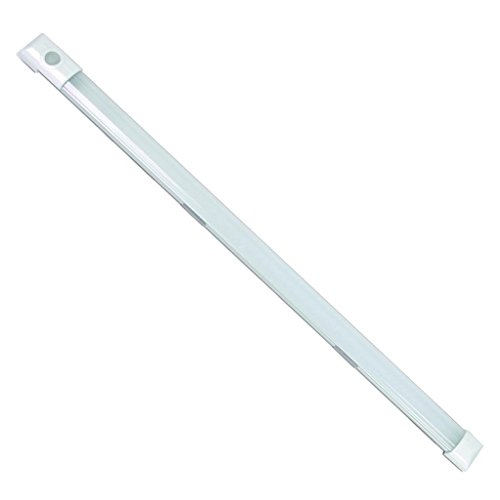 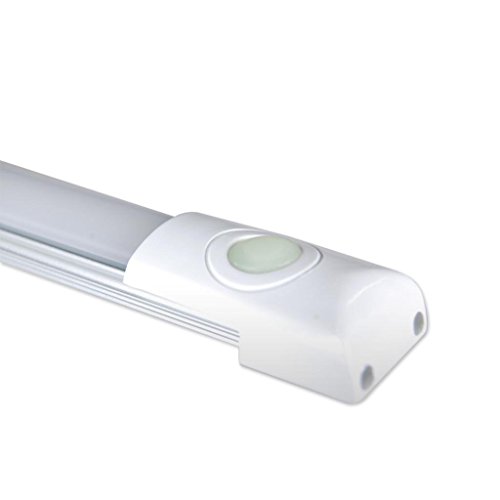 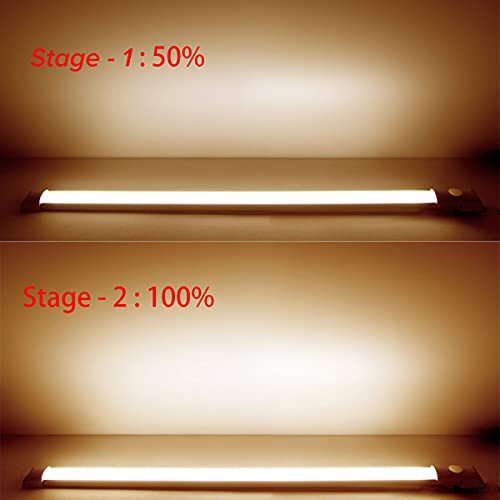 This multi level power strip of illumination will provide the ability for you to see at the level you want. The strip itself is just shy of being 1 foot long with a light angle of 120 degrees. It is ideal for placement under a cabinet, over the sink or other area you need illuminated. The translucent tube doom allows for illumination to be soft yet appealing. This unit also has 2 power settings which are 300 lumens using 5.1 watts and 150 lumens at 2.6 watts and 0.18 Amps. It stands just ½” off the surface, it is mounted too with 2 anchor screws. It is powered by 2 wires of opposite polarities and has its own switch. 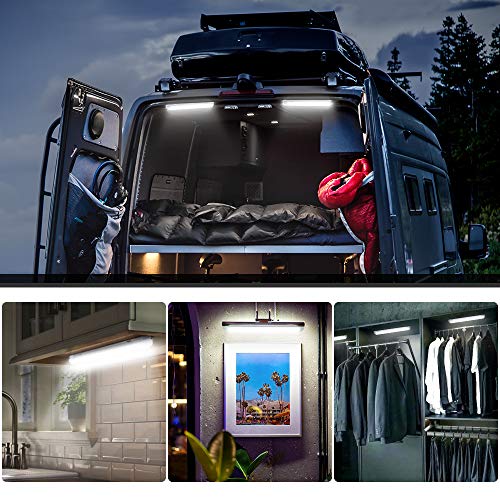 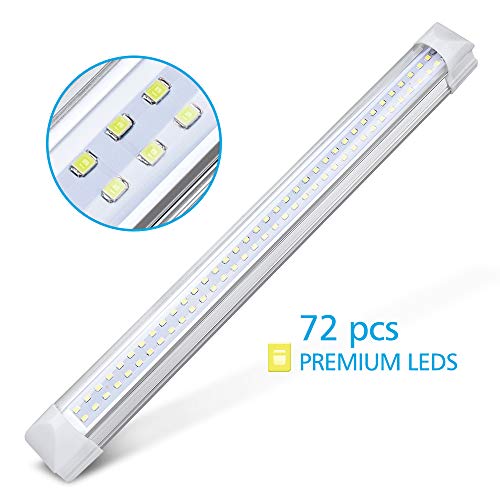 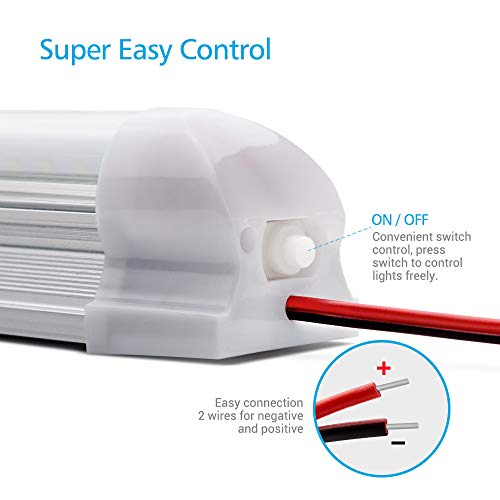 This 12 volt LED strip lighting produces a level of illumination at 500 lumens. That light is generated from 72 individual diodes over the 13.5” long strip, using 6 watts per unit. Unlike the other lights, this unit comes as a matching pair which can be placed next to each other or in a different location on the interior of your caravan. The dome tube cover is transparent, so the full strength of the light is allowed to pass through it. Each unit comes with double-sided tape for mounting or can be mounted with 2 brackets with the edge of the dome being 1.3” from the mounting surface. It is powered by 2 wires of opposite polarities and has its own switch. Changing caravan lights to 12v led lights for campervan with this strip lighting system is easy to install with no need for screws for fixing. 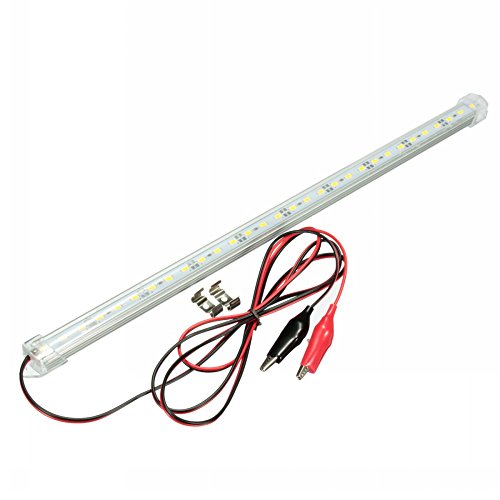 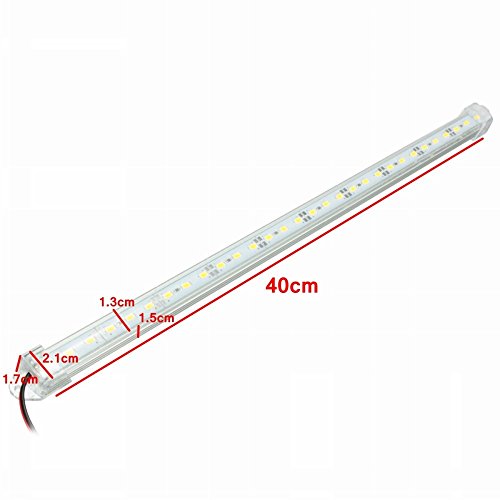 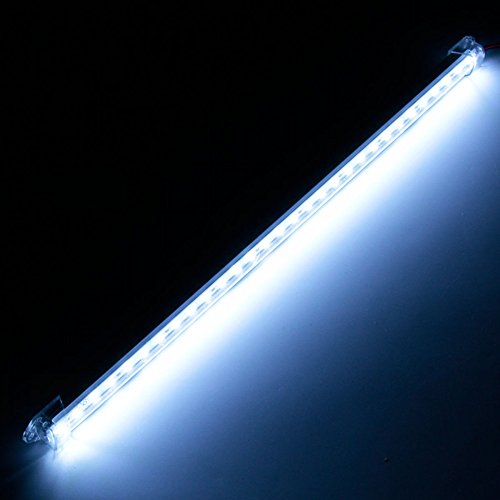 These 12 volt LED lights also creates 500 lumens, but is 16” long with 30 separate diodes mounted with a 120 degree viewing angle in it. Because of the reduced number of diodes, it only consumes 3 watts of energy with the amps not listed. This is a single unit and is mounted using 2 anchor screws and the dome cover is 0.8” off the mounting surface. The cover dome is transparent, and the entire unit is listed as waterproof and vibrate resistant. It is powered by 2 wires of opposite polarities, but does not have an on-off switch.

In places, you need a light to read or other purposes, these spotlights do the job and look great. It has a nice aluminium and brushed nickel finish with a flexible arm that can be moved 180 degrees. These 12v LED lights for campervan produces 150 lumens at a warm light of 3000 Kelvins while only using 3 watts. These 12 volt LED spots are sold as a pair and each one has an on-off switch and is mounted with 2 anchor screws. It is powered by 2 wires of opposite polarities and has its own switch. Changing caravan lights to LED Spots will take a little more effort, but the end result will be well worth the extra effort. 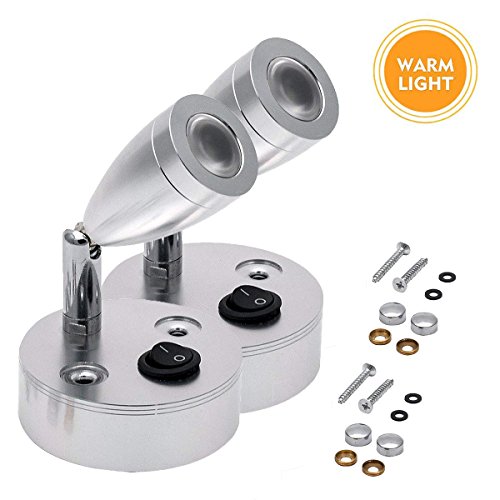 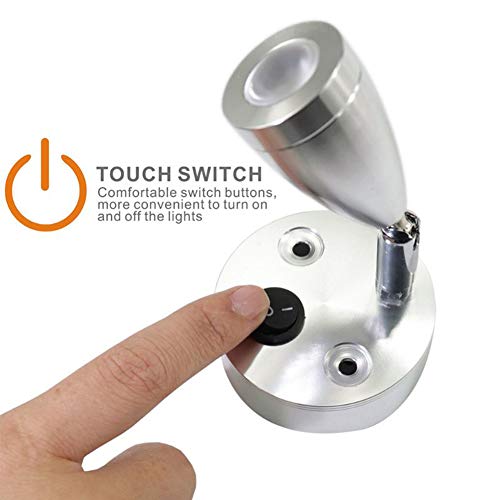 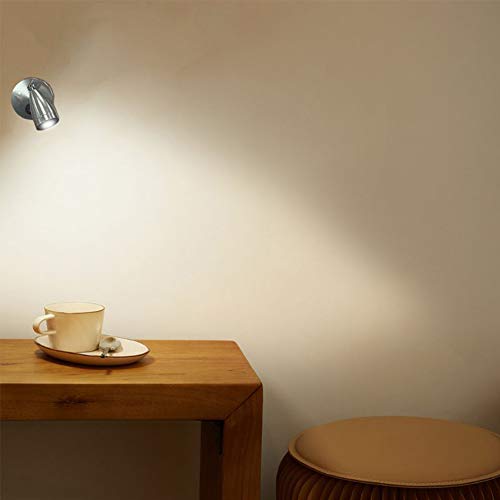 Is LED lighting right for you?

12v LED lights or light emitting diodes are similar to resistors, except they only allow for electricity to pass one way through them. When the electricity passes through them, light is generated. This type of device is known to have a long life span, with the average LED now lasting 30,000 to 50,000 hours.

These little 12v LED lights for campervan are also capable of generating the same amount of lumens as other bulbs, including CFL's and fluorescent bulbs, but at a reduced level of power required. This makes them more power efficient than any other device that generates light.

The 12 volt LED lights also generate no heat, unlike other light sources. This makes them the safest to use.

LEDs are commonly used in strips and modules, but they can also be purchased as a screw in bulbs and spotlight fixtures. Because of that, new lighting fixtures are not always necessary. If your lighting system is old or original, replacement with new wires will provide the best and most efficient energy system possible.

The LED is extremely lightweight, so mounting many of them is done with double-sided tape. The old strip lights that have been mounted with screws and brackets can be removed. The new LED strip lighting can be mounted with 2 simple anchor screws.

The design of many of the fixtures is similar in size to standard lighting fixtures of the past. Because of that, new fixtures of the same style can be found and reduce the installation time required for the changeover.

Purchasing a new lighting system will require a small investment, but the money spent will be recouped when using the system because of the reduced power consumption of the 12 volt LED bulbs.

For many, the biggest drawback is installing the new lighting system. Some 12 volt LED light fixtures are plug and go types, while others will require soldering. If you plan on doing this yourself, choose the lights that are easy to mount and install.

The type of system currently in use must be known. This includes the voltage used, 12V is standard, but check to make sure.

The existing wiring should also be checked. An Ohm metre can be used to detect any wires that should be replaced.

It is advisable to write down the sizes of the light fixture already in place. Know how they are mounted, the number of screws used and if you want the same type to replace it. Replacing like for like is the fastest, but not always the most desirable if a change is wanted.

A 12 volt LED light system in your caravan will make it possible to shine lights well after dark with little to no worry you will drain the battery. Their extended lifespan of 12 volt LED lights means that once your caravan is converted you will have years of enjoyment before you need to buy new  LED bulbs or LED lighting srips or spots.